Just me. Bloggin’ about whatever strikes me as blog-worthy at any given time.

You ever have those days where it is just one thing after another? None of them overly significant standing alone but when a poor woman doesn’t get much break from her day overflowing bullshit at her, it may just make her a little crazy. Well… that was yesterday.
Just to touch on some of the highlights…. Addison pooped on my stairs and ate some of it. Haden DID NOT want to be at co-op classes yesterday due to lack of sleep and was very difficult about it. My MIL ditched taking Haden to the zoo for the second week in a row, which thankfully I didn’t even tell him he was going this week. Haden ran through a mud puddle, slipped, fell, got soaking wet and skinned his elbow, right after classes. So he had to ride home in his underwear. Michael didn’t get me chocolate at the store like he said he would. Then, the big finale for the day was discovering that the reason I had tiny moths in my pantry was due to an infestation in my rice box. Absolutely gross! We threw away a lot of food last night.
So yeah. And really I am leaving a lot out.
I am bummed that I was in such a bad mood yesterday for a couple different reasons. One of them being that yesterday was my Uniqueness yoga class. I had totally been planning to take a group picture of my kids in their signs. I had planned to blog all about it and title the blog “They Were Born This Way”, cause I am totally lame like that. I wasn’t really in the mood to be teaching but I tried my best to play like I was but my head wasn’t in it and Haden kept coming into my class because he didn’t want to stay in his. As an afterthought when I got home, I at least took a picture of my sign. 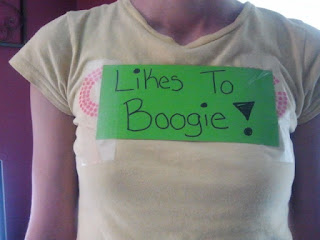 I told them much to Michael’s embarrassment, I like to randomly break into dance when I hear a song I like or if I am just happy. It doesn’t much matter where I am. Michael says I am not as cool as I think I am. 😛 I say… Whatever! I act how I feel.
Tomorrow is Haden’s birthday! He is turning 5! Where the hell has that time gone? I have plans to make cute gummy worm cupcakes with him tomorrow and we are taking him to Stevie B’s for pizza and arcade time at dinner. Then Saturday is the party! Wish me luck. Birthdays exhaust me.

This site uses Akismet to reduce spam. Learn how your comment data is processed.