Just me. Bloggin’ about whatever strikes me as blog-worthy at any given time.

I don’t typically talk about politics or religion publicly unless I know I am with like-minded people. They are such sensitive topics that tend to get people feisty and I generally like to try and preserve my friendships by not going there. But I recently started waving my lefty flag more fiercely. 😉 I hope that my righty friends and family love me enough to not be offended by my way of thinking, as I try to do the same for them.So I thought I would put a compilation of my thoughts on OWS here, since so many people seem to be curious about it, weather in a REAL way or just in a way as trying to find something to use to tear it apart. 😉
The Occupy movement was started as a call to action against the fact that corporate greed and corrupt politics set our policies in this nation and the crisis that these have put us in as a nation. Most people want a more in depth answer than that though. I like this video, which is just a reading of a declaration made by the Wallstreet protesters tells you little bit more about why people are pissed off enough that they have amassed themselves in cities all over the US.
The thing that I find most interesting and also amazing about the movement is that you have people of all races, financial backgrounds, ages, etc. You have Republicans, Democrats, Libertarians, Independents, Anarchists, Socialists and everything in between.
Media and other public figures have done their best to try and put all occupiers inside of a little stereotypical box in an attempt to make others take the groups coming together less seriously and to put a stigma in place to deter people from wanting to get involved. They are a bunch hippies sitting around doing drugs and beating on drums. They are overprivileged white kids that are parasites on the world with nothing better to do. They are all unemployed lay-abouts that need to be out looking for a job instead of complaining. The list could go on and on… They are anti-capatalism. They are anti-government. They are pro-socialism. They are pro-Obama or anti-Obama. They are… they are… they are… people.  All different types of people, with different agendas but the end of the day they are people that seek change. It is unlikely that they will ever agree on how that change should be brought or what changes are the most important.
Some people seem to think that is what makes the movement weak. I see it differently though. I think that alone is what makes what is happening now so HUGE and ultimately what will make it successful. And the occupation itself, which a lot of people don’t seem to understand, in my opinion is the most important part of what is happening right now. It isn’t just the protesting and the marching. Those have been done before. The actual occupation of a public space keeps the movement at the forefront of the minds of all government officials. Makes them harder to ignore and eventually, if they want this to end… Change will HAVE to happen. Because regardless of what so many seem to think… they aren’t going anywhere. 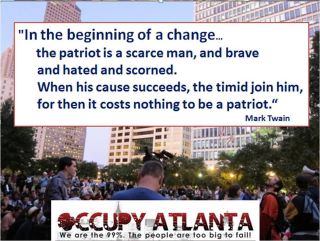 These are just some of the pictures that I have gotten at Occupy Atlanta the few times I have been able to go. Although, I don’t completely agree with exactly how things are being ran throughout the movement and in Atlanta itself… I also acknowledge the fact that I am not out there every day, in the thick of it, volunteering the majority of my time to making it work. I think it is unproductive for people to sit around criticizing something that they aren’t putting much of themselves into. Until you do, you have no standing for judgement.

I have read so many great blogs and articles recently in regards to everything that is happening now, so I thought I would share a few of my favorites. 🙂What’s Occupying Us All from Psychology Today
Why I Support OWS
Everything The Media Told You About Occupy Wall street is Wrong
Open Letter to that 53% Guy
Ambiguous UpSparkles From the Heart of the Park
You can learn more about what is happening at Occupy Atlanta from their website, http://occupyatlanta.org/ and by following their Facebook page. There are many ways to help contribute even if you can’t or do not feel comfortable to go out OCCUPYING!

This site uses Akismet to reduce spam. Learn how your comment data is processed.